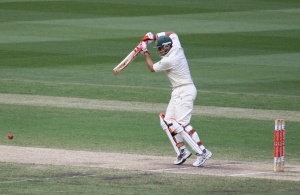 Former Australian batsman Matthew Hayden today announced his retirement from all forms of cricket.  Hayden, 40, played 103 tests for Australia, which yielded 8,625 runs and 30 centuries with a batting average of above 50.

Debuting in 1994 against South Africa, it took Hayden five years before his international career began to blossom.  His 549 runs in three tests against India in 2000/2001 was his best series return, at an average of 109.80

His opening partnership with fellow former left-hander Justin Langer became one of the most prolific test partnerships, collecting almost 5700 runs.  Hayden’s aggressive no-limits style at the top of the order, along with his 191cm height, would send fear through bowling attacks.  He could tear them apart, able to hit sixes with nothing more than a well-timed loft.

Part of the first Australian team to reach 16 test match victories in a row, Hayden held the record test score for a short time of 380, coming against Zimbabwe.  His ability to wow the crowds with monstrous hitting and outstanding batting saw his partnership with Langer prosper.

Hayden spent three seasons with Indian Premier League (IPL) team the Chennai Super Kings, and scored 572 runs in the 2009 season.  His 93 off 43 balls to begin his 2010 IPL campaign came after a relatively slow run.

Off the field, Hayden has been very busy as a chef, having already released a cookbook and hosting his own television show.  He has also worked and served as an ambassador for World Youth Day in 2008.