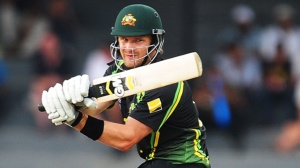 Australia’s Twenty20 World Cup campaign has begun with a seven wicket victory over Ireland yesterday.  Shane Watson scored 51 off 30 balls (including three sixes) and grabbed 3-26 with the ball from his four overs in a man of the match performance.

It wasn’t until a 52 run partnership from the O’Brien brothers, Kevin and Niall, that Ireland were starting to look promising.  However, Watson grabbed two of his three wickets in quick succession, clean bowling Niall then finding the edge of Kevin’s bat, giving an easy catch to wicketkeeper Matthew Wade.

Starc again struck, yorking Trent Johnston for 7, before a late 22 run partnership from Nigel Jones and Alex Cusack saw Ireland post a total of 7/123, having been 4/33 in the earlier stages of the match.  Starc was Australia’s other multiple wicket taker, with 2/20.

Australia lost their first wicket in the eighth over with the score on 60, David Warner finding the man near the boundary, ending his innings on 26.  Watson continued to speed up his scoring rate, joined by Mike Hussey (7), and brought up his fifty with a six.  He was to depart soon after though on 51.

After the fall of Hussey with the score on 95, Cameron White (22 not out) and captain George Bailey (6 not out) saw the Australians home with a score of 3/125 with 29 balls to spare.  With Watson’s dismissal a run out, Kevin O’Brien and George Dockrell picked up one wicket each.

In very humid conditions, Bailey introduced Maxwell in the sixth over, and he picked up the wicket of Joyce.  Hogg, who at 41 is still running around the cricket field with seemingly relative ease, chimed in for his wicket soon after Maxwell, claiming the scalp of Wilson.

While Watson was the pick of the bowlers, Starc’s two wickets in combination with some tidy line and length bowling was the cause of much trouble for the Ireland batters early.  In contrast, Watson and Warner looked very settled on a rather sandy-looking pitch.

9th on the International Cricket Council (ICC) rankings table before the commencement of the Twenty20 World Cup, Australia’s victory yesterday will be a confidence boost ahead of their next match against the West Indies in Colombo on Sunday.  It also comes as a timely relief for captain Bailey, with the team having underperformed coming into the tournament.